Giving Back to the Community

The Caputo Family of G&L and Sons has a strong commitment to helping their community.  Over the years we have worked on large scale projects as well as projects that might take a few hours.  We have been so fortunate through the years to have wonderful customers who have believed in us and have allowed us to work on their northern New Jersey homes that we wanted to help members in the community who have not been able to do the projects for themselves.

A Much Needed 1st Floor Addition

For this project, we partnered with Giants of Generosity, Inc., a 501C3 charitable organization, and North Jersey National Association of Remodeling Industry Chapter, (NJ NARI).

We first started working with Jane Albanese and her Giants of Generosity charitable organization back in 2010 when the North Jersey National Association of the Remodeling Industry (NJ NARI) was asked to help Eamonn Radburn of Ridgefield Park.  Eamonn, an employee of the Haworth Department of Public Works, was also a volunteer firefighter.

He was electrocuted after grabbing a live wire carrying 240 volts of power while cleaning up after a major storm.  He spent almost a year in a wheelchair and spent 9 months in physical therapy learning to walk again.

As a member of NJ NARI, G&L and Sons donated their time and resources to frame a 1 story addition which included a bedroom, bathroom and laundry room.  We assembled our team and as you can see framed a nice size addition for the Radburn's. The architect’s design provided an easy flow through the addition into the existing first floor. 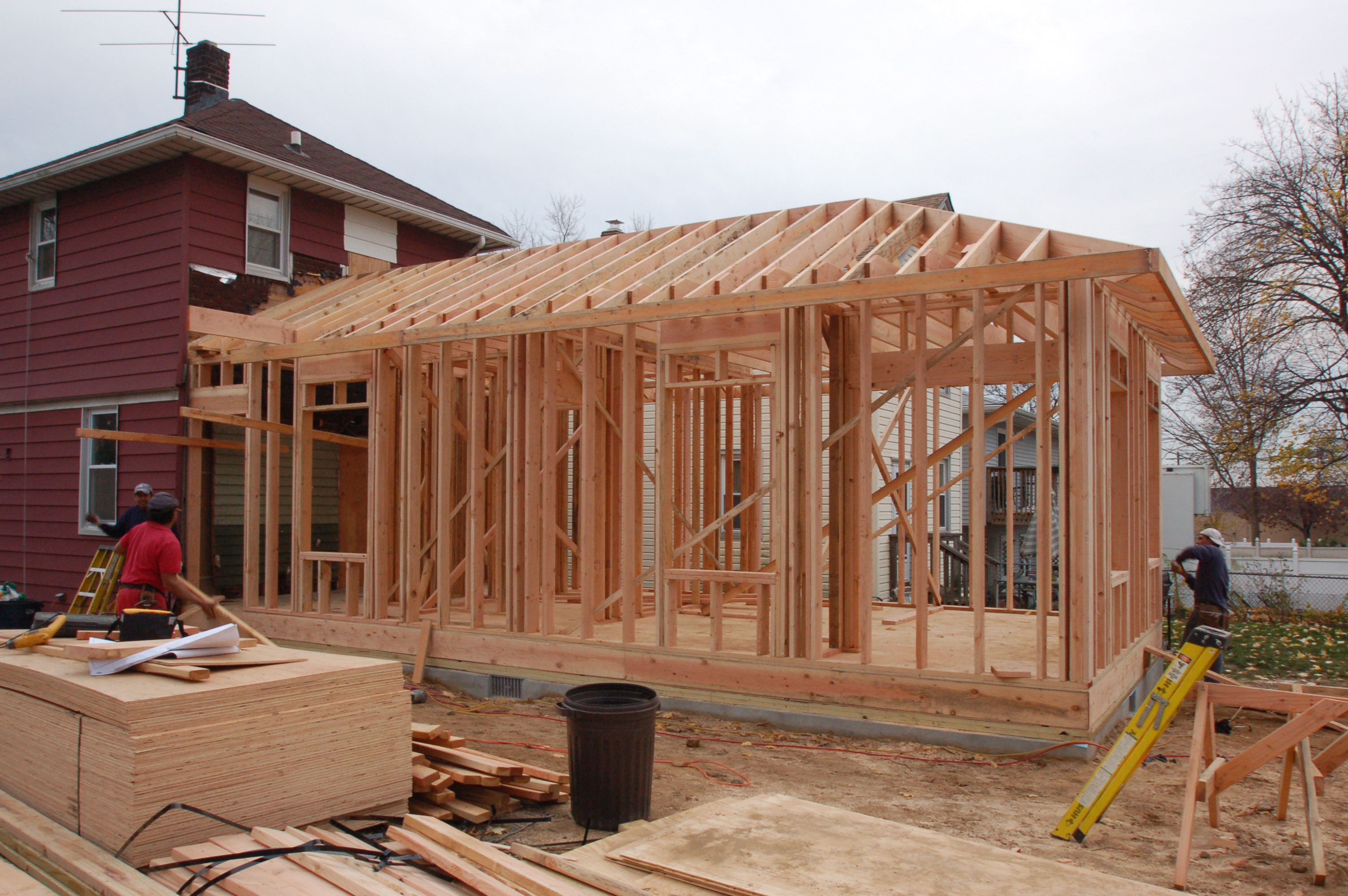 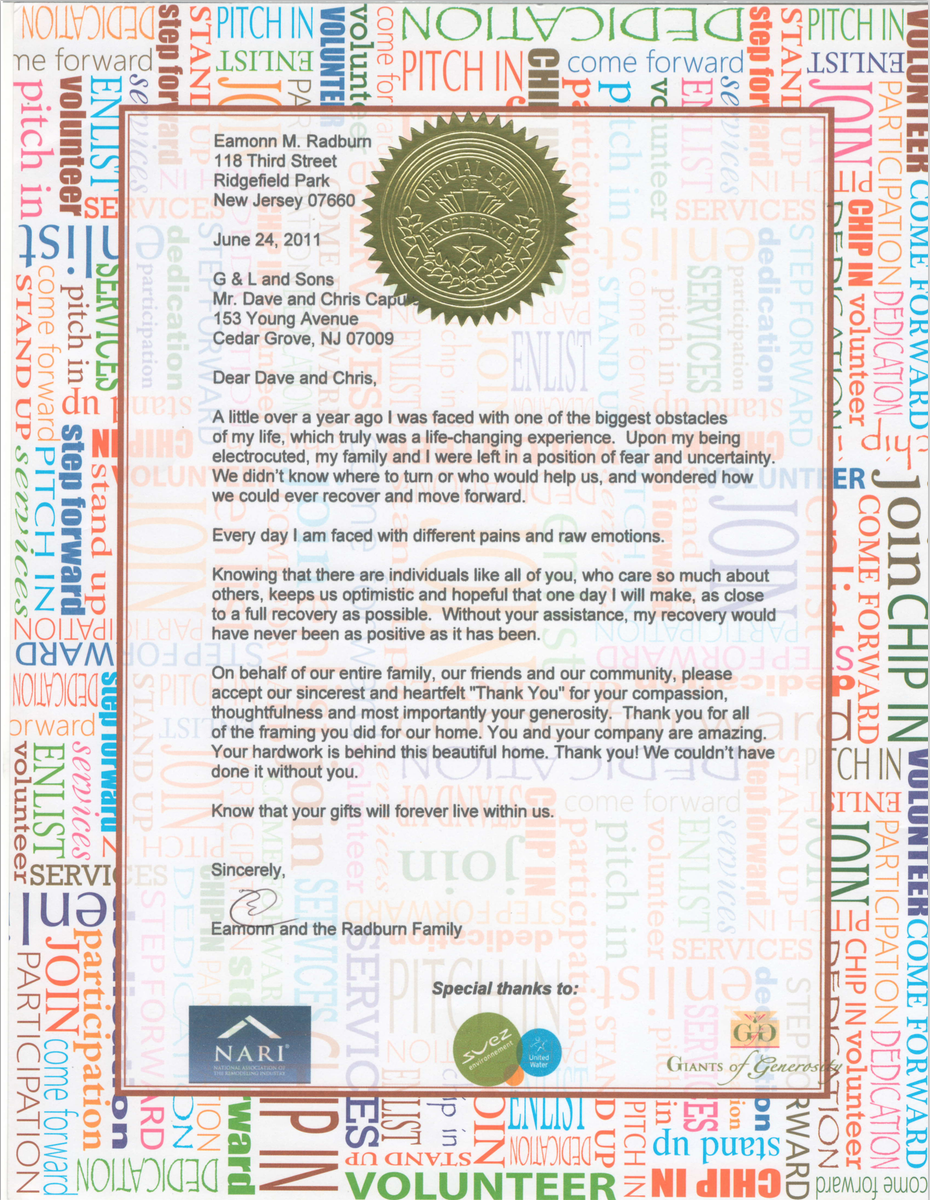 In the spring of 2015, Jane Albanese of the charitable group, Giants of Generosity, Inc., reached out to G&L and Sons for assistance in constructing a wheelchair ramp for Conrado Bermudez of Paterson.

Conrado was awaiting a kidney transplant and went for dialysis treatments three times a week. In order for Conrado to receive his dialysis, two men would carry him down eight steps to the medical transport van.  Knowing that a wheelchair ramp would not fit in the space available between the houses we determined that a wheelchair elevator would be required.

Jane reached out to several elevator companies and James Boydston of Handi-Lift in Carlstadt donated the $14,000 elevator and the labor to install it.

Chris and David worked with James and his team to determine what would be required to integrate the elevator in the front of the house. After the plans were drawn up, Chris prepared the building permit paper work and submitted it to the Paterson Building Dept.

Upon approval by the Paterson Building Department, Chris Caputo coordinated with an electrician who facilitated the power to the elevator panels and directed a mason to build a concrete pad.  James Boydston and his team installed the donated elevator and approval was granted.

In November, there was a ribbon cutting ceremony that included everyone involved in the project, including Giants of Generosity, Jane Albanese and its board members as well as Mayor Torres from the City of Paterson. 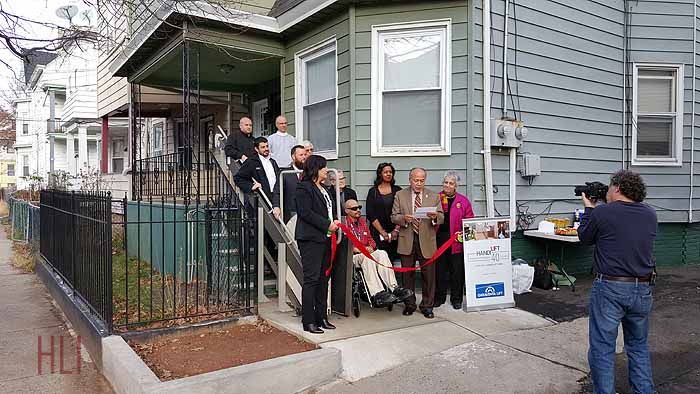 A Place to Call Her Own

Another community service project on which G&L and Sons Renovations, NJ NARI and the National Remodeling Foundation (NRF) collaborated was a remodeled bathroom for a girl with Cri Du Chat Syndrome.  David Caputo worked on the project, starting with the demolition of a section of a room and framing a partition wall that would become a bedroom with an attached bathroom.

A Single Mom in Need

A Dishwasher for a Single Mom

Jane Albanese of Giants of Generosity, Inc. contacted Chris Caputo about a smaller but just as worthwhile project.  A deaf, single mom caring for her son needed the assistance of an operational dishwasher.